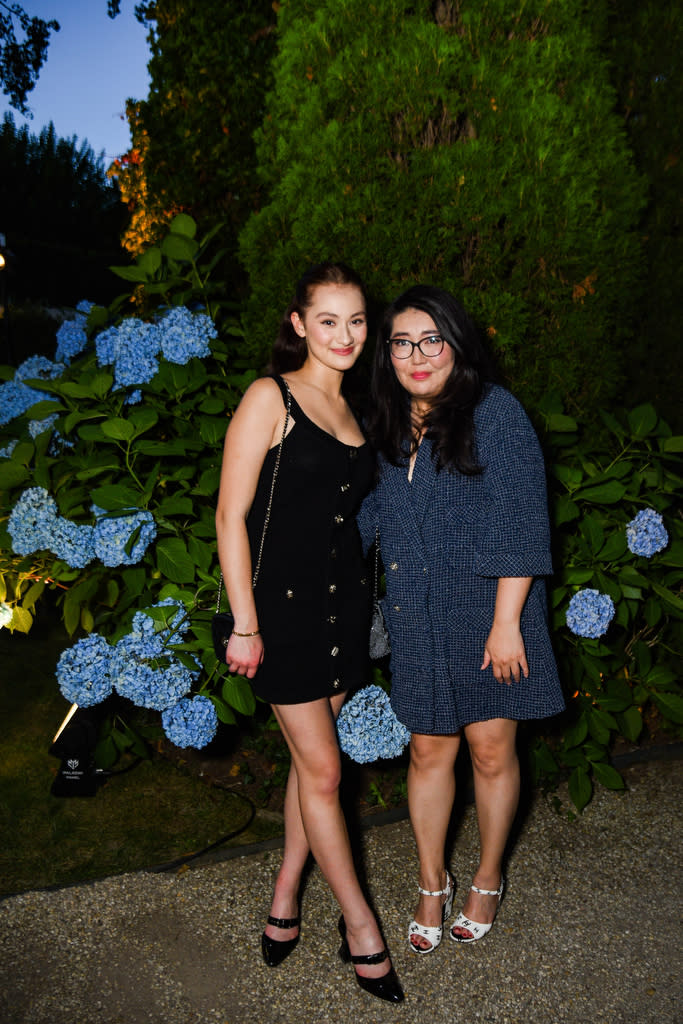 As the Hamptons summer scene has been in full swing since Memorial Day, Saturday night Chanel marked a mid-season arrival in East Hampton: its pop-up store.

The French luxury house hosted an intimate group of friends in the east for a celebration of the seasonal store. The evening began with cocktails inside the boutique, which was unveiled at the end of June and will remain open until the end of the summer season. Guests including Sydney Chandler, Jessica Seinfeld, Rachel Zoe, Athena Calderone, Lizzie Tisch, Gucci Westman, Destiny Joseph and Reign Judge walked past the store’s famous gray clapboard building (the work of Gray Gardens architect Joseph Greenleaf Thorpe) at 26 Newtown Lane before heading to the nearby Baker House, where the evening continued with an alfresco dinner.

Jimmy Chin’s career as a professional climber, skier and adventure documentary filmmaker has taken him to some of the most inaccessible landscapes in the world. On Saturday, his career landed him in the VIP Chanel crowd with his wife, Elizabeth Chai Vasarhelyi. “Jimmy was trying to buy everything [at the boutique], and I was trying to hold it back,” Vasarhelyi said. The married filmmaking duo, who co-directed the 2019 Oscar-winning documentary ‘Free Solo’, live in Wyoming but own a home on Long Island and were in town for the party. “It’s good to celebrate a brand [Chanel] who does so much to support artists, so of course we love being here,” she added.

(Chanel, naturally, was the crowd’s accessory of choice for the evening.)

Chin and Vasarhelyi recently completed their first fiction project, a biopic about long-distance swimmer Diana Nyad, and are finishing a documentary about close friends Kris and Doug Tompkins, founders of The North Face and Esprit, and Yvon Chouinard, founder of Patagonia. . “It’s kind of a love-adventure story, but they’ve become some of the greatest conservationists of our time,” Chin said.

“[Kris Tompkins] found the love of her life in her forties, then she left everything. She’s Patagonia’s first general manager – she built this company for 23 years, then she runs away and flies off to the real Patagonia. It’s a romantic story, but also about how we live with intention,” Vasarhelyi added.

Chin also stars in the docuseries “The Edge of the Unknown,” which will be released this fall on National Geographic and Disney+. “It’s a show in response to all the shows I see about adventure, skiing and snowboarding. I wanted to understand all of this and really see what the motivations of these athletes are, the sacrifices they made and their quest for transcendence that I didn’t feel like I saw in other stories,” he said. he declares.

Lola Tung, the star of the hit Amazon Prime series ‘The Summer I Got Pretty’, had just flown into town from North Carolina, where she is filming the show’s second season. The love triangle-filled coming-of-age teen drama is set in a fictional, upscale summer beach community — a world many of the dinner party crowd were familiar with. “I flew with Jenny Han – the designer [of the show] — today, and now we’re here,” the exuberant 19-year-old actress said, standing by the pool as she looked around the lush grounds. “For some reason, [Chanel] wanted me here; I’m very excited to be here. It’s my first event like this, and it’s beautiful, and there’s a bunch of lovely people here,” she added. “It’s beautiful, it’s gorgeous, everyone is fabulous, and I can’t believe I’m wearing Chanel. It’s really cool.”

Tung bonded with Han soon after arriving; the popular young adult author captured content from her young star for Instagram en route to the dinner tent, where guests had their choice of steak or whole lobster as they dined surrounded by fresh flowers and draped greenery.

After dessert (blueberry cobbler) hit the tables, the evening ended with a musical performance by Gracie Abrams, the 22-year-old daughter of filmmaker JJ Abrams. “I’ve loved Chanel with all my heart since I was little so it’s surreal,” said Abrams, who wore embroidered velvet pants and a shimmering tweed top from the brand’s fall collection. “If I look fragile, it’s because I can’t believe I have the chance to wear these clothes right now,” she added, before embarking on her romantic ballad “Friend”.