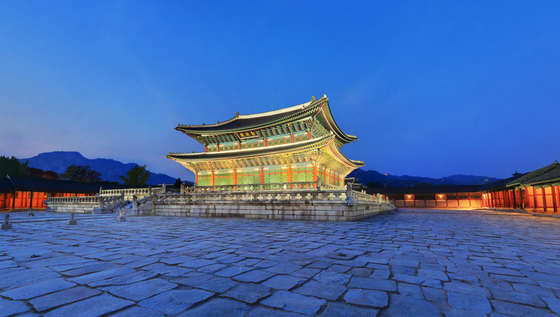 Gyeongbok Palace in Jongno District, central Seoul. Gucci was scheduled to hold a fashion show at the Geunjeongjeon of Gyeongbok Palace on November 1. [CULTURAL HERITAGE ADMINISTRATION]

Gucci canceled its upcoming fashion show at Gyeongbok Palace after the Halloween disaster in Itaewon, central Seoul, on Saturday night.

“After discussions with the Cultural Heritage Administration, we have decided to cancel the fashion show that was to be held at Gyeongbok Palace on November 1,” Gucci said in a statement late Sunday.

“We want to respect Korea’s period of national mourning and send our deepest condolences to the victims of the tragedy in Itaewon on the 29th.”

Gucci had planned to showcase its “Gucci Cosmogonie Collection Seoul” at a fashion show at Gyeongbok Palace in Jongno District, central Seoul on Tuesday.

The collection was first unveiled at Castel del Monte in Puglia, Italy in May.

It was to be the first fashion show in Korea led by Alessandro Michele, creative director of Gucci. Some 500 guests were expected to attend, including diplomatic and business figures and celebrities.

An aerial view of the Itaewon scramble near the Hamilton Hotel in Yongsan District, central Seoul, on Saturday evening [YONHAP]

The event was canceled following a chaotic stampede that claimed the lives of more than 150 people in central Seoul’s Itaewon district on Saturday night.

Many other concerts and festivals are also canceled or delayed across the country due to the tragedy.

At an emergency briefing held at noon on Sunday, Premier Han Duck-soo declared Yongsan district a special disaster area and announced a delay on all non-emergency matters.

“We will provide the families of the deceased and those who have been injured with grants and other necessary measures. We will also work with embassies to ensure that injured foreigners are properly cared for,” he said. .

At press time on Sunday, 151 deaths have been confirmed by the National Fires Agency, which added that 19 of the 82 injured remain in critical condition.

A place to remember the crash victims is being prepared in front of Itaewon Station in central Seoul’s Yongsan District on Sunday. [YONHAP]

The best beauty launches of October 2022