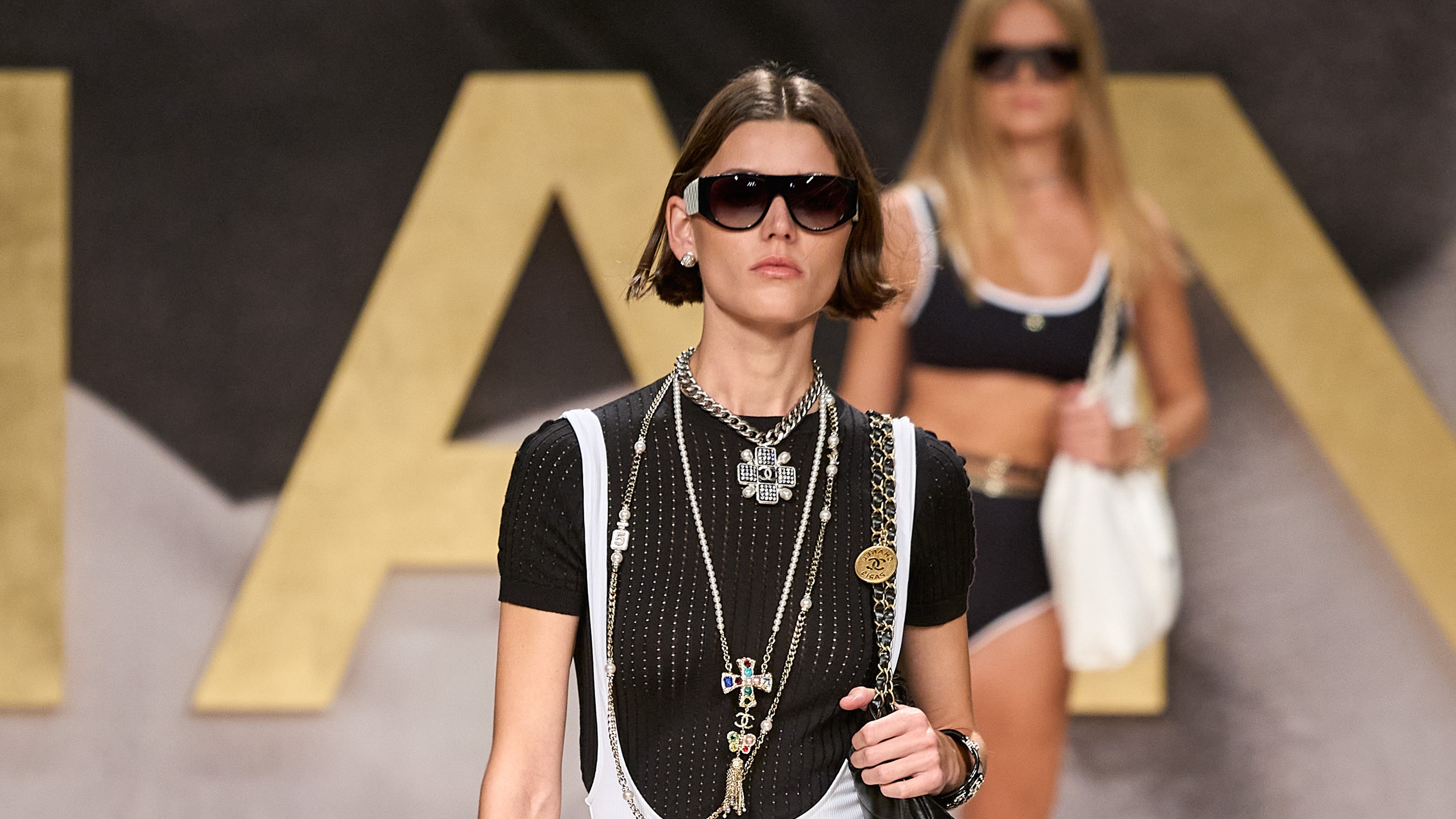 Back in the turn of the 90s, as podcast listeners Trending: the 90s will find out, the models raced down the elevated runways exuding the zest for life as they twirled and sprayed for the photographers who had scrambled for a prime position, not only in the mosh pit at the end of the runway, but throughout its length. (Front row seats were still prized in the fashion hierarchy, but generally offered a fantastic view of a photographer’s back or a model’s nostrils.)

“I loved the sound of flashes that go off during fashion shows in the 80s,” recalls designer Virginie Viard in the notes for today’s Chanel show. “I wanted to find this emotion again. So this season, Viard tried to channel that energy and joy into a collection that didn’t just refer to the era in clothing, staging and accessories (bottle-shaped bags No. 5; Louis heels flared pirates), but also the soundtrack: witness George the hymn of Michel Freedom! ’90—In a contemporary cover version by Christine and the queens—To put the models in the spirit of the party.

While the Grand Palais, the scene of so many spectacular productions by Chanel, is undergoing an epic renovation (generally underwritten by Chanel), this collection was presented in an ephemeral space, fitted out in the shade of the Invalides, which allowed Viard to remember the shows to which she had been delighted when she was a fashion neophyte.

At the end of the elevated runway, for example, photographic duo Inez van Lamsweerde and Vinoodh Matadin, now deeply rooted in the Chanel world, played old-school photographers by taking snapshots of the models who stopped to pose and preening for them and seemed to have the time of a lifetime, bright smiles and flowing hair rather than assuming the usual look of sulky disdain. Inez and Vinoodh also provided the playful videos (shown in an anteroom before entering the exhibition space), which depicted the stars of Chanel’s model cabal – including Lily-Rose Depp, Alma Jodorowsky, Rebecca Dayan and Quannah Chasinghorse – turning the camera on them. Photography, after all, is in the brand’s DNA.

The show also opened up to Karl Lagerfeld – who sent shockwaves when he put Chanel-branded underwear as outerwear on the runway for spring 1993 – with black and white footage of briefs, swimwear and sports bras, sometimes veiled in black glittery mesh pants or shown with skirts above the knee. While trying on accessories days before the show, Viard pointed out the crochet effects she had worked on with braid company Bacus, and the twist of the bright pastel spring tweed suits – think Naomi, Linda, Chanel-clad Carla pictured by Steven Meisel for Vogue, March 1994 – that she gave the twist of a longer skirt or a jacket flap in the back, suggesting a traditional tail coat.

“Karl always made fake jeans,” Viard remembers, shuddering at the memory. “In the 90s they always seemed to be in pink tweed – ugh! To me it was horrible back then, but now I love! “

Her own reimagined denim proposals this season included a cute summery deckchair stripe cut into rigid, 1960s-style little dresses with bold stripes of black sequins, creating the trompe-l’oeil illusion of a classic Chanel cardigan suit. ; or charcoal denim with a butterfly print. These butterfly wings were amplified as prints on drifting chiffon pieces that swirled as the girls twirled, providing another charming throwback to a fashion moment that celebrated the bliss the fashion flock is feeling. in a season of cautious re-emergence and optimism.