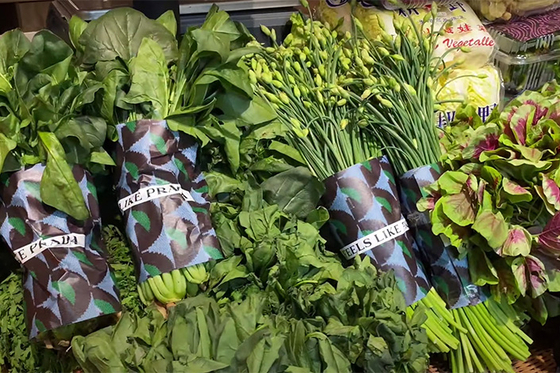 Blog: Chic wet markets are all the rage in China

A wet market in Shanghai became the topic of discussion for this year’s Golden Week (the country’s national day October 1-7) in China.

During the week, young shoppers in trendy outfits flocked to Wuzhong Market in downtown Shanghai. At the market entrance or in front of the fruit stalls, they posed for photos carrying vegetables wrapped in Prada wrappers, finding the best angle to show the brand.

It turns out that at the end of last month, Italian luxury brand Prada collaborated with Wuzhong Market on a two-week pop-up event. All of the market stalls and exterior walls were wrapped in extra-large Prada logos and designs from the brand’s Fall / Winter 2021 collection. Vegetables, from cabbage to carrots to eggs, were also packed in Prada wrappers.

What excited buyers was that those who spent at least 20 yuan ($ 3.10) in the market would receive a limited-edition Prada paper bag, and this promotion lasted until October 10. A vendor told Zaobao that most of those who frequent this market are usually those who live nearby. However, because of the pop-up, many unfamiliar faces flocked to the market, ostensibly “to get the paper bags”.

This writer arrived at the market at 10 a.m. on October 2, which coincided with when Prada representatives came to hand out the limited edition paper bags to stall vendors. The 20 to 30 paper bags each supplier received were collected within 10 minutes.

Aunt Li, 60, who lives in the suburbs, learned that Prada was coming to Wuzhong market after parading Douyin. She and her friends immediately took a walk to the market. They spent an hour on the subway to get to town, but arrived too late and missed the opportunity to get a limited edition paper bag. But she heard from a salesperson that the bags would be handed out at 1pm, so she decided to come back later to “join in the fun”.

Aunt Li grew up in the area. She told this writer that Wuzhong market was just an ordinary market in the past. After being transformed two years ago, it has become a popular attraction for internet celebrities. “It’s so refreshing that Prada landed here. It’s very creative to have a high-end brand collaborate with something so close to ordinary people. It would definitely allow more people to feel and experience a different kind of Shanghai, ”she said.

This pop-up was organized on the sidelines of the launch of the Prada Fall / Winter 2021 collection. Besides Shanghai, Prada will also present its prints from the Fall / Winter collection in buildings of different architectural styles in Tokyo, Rome, Milan, New York and Paris, giving a new look to the streets of these cities.

For a high-class international luxury brand to expand its platform in one of the difficult Chinese markets, it is due to the growing importance of the Chinese consumer market as well as the changing status of the markets.

Prada’s financial reports show that its sales in the Asia-Pacific market in the first half of this year were 600 million euros ($ 696 million), up 35% from 2019. This was mainly due to a 77% jump in the Chinese market. . In February of this year, the group defined a long-term growth strategy for the Chinese market, including improving its brand awareness and customer experience through pop-up stores and immersive retail spaces.

With stronger purchasing power among the middle-income Chinese group, markets across the country are also modernizing and taking on a whole new mission. After the renovation of Suzhou Shuangta Market in 2019, it became a multi-purpose integrated space including market, restaurants, performance hall and bookstore, revitalizing the old town. Jianguomen Market (建国门 菜市场) in Xi’an has been redeveloped into a space for cultural creation with food, accommodation, cafes, reading spaces, exhibition spaces and bars for young people .

The Sanyuanli market in Beijing’s Chaoyang district was the first of the Chinese markets to go viral, providing a model for the transformation of other such markets.

This market was built in 1992; after the publication of advertising images in 2018, it became the location of a book launch, and the collaboration turned the market into a marketing darling. In 2019, BMW gave Sanyuanli a makeover, turning the stall signs to neon green for a while. And in May of this year, a food-themed calligraphy exhibition was held in Sanyuanli, bringing a literary atmosphere to the market.

Since 2018, Sanyuanli has been a must visit for Internet celebrities and a photo spot for many electronic media stars. These crowds of visitors are the best free marketing tool for Sanyuanli; However, when this writer visited Sanyuanli, she found out that photos and videos are now prohibited in the market, because taking photos has disrupted the activities of traders.

This story was first published by ThinkChina.

To download our app for getting late-breaking alerts and reading news on the go.

To have our free weekly newsletter must read.

Designer fragrances are cooler than ever, these are the ones you need to know