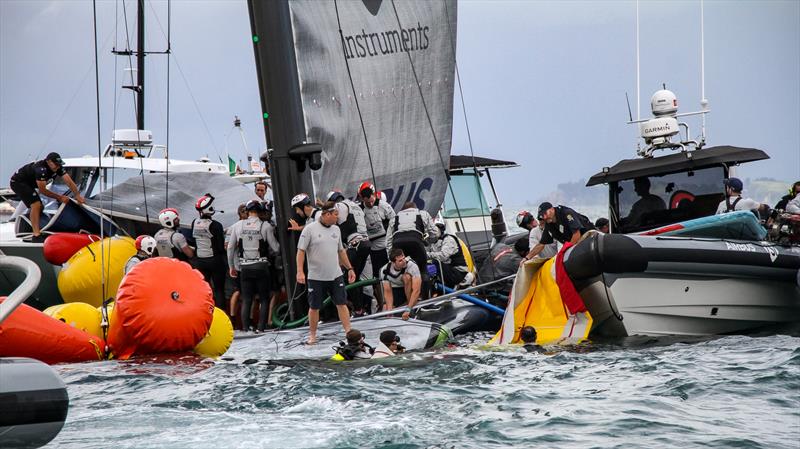 In this new video, American Magic skipper Terry Hutchinson and others share their memories of the brand’s time in determining the campaign and subsequent events, at the end of the penultimate stage of Race 3 of the Prada Cup Round Robin 2.

â€œAs we were making the left turn, a 23.5 knot gust hit us, and it passed,â€ Hutchinson recalls.

“My best memory is when I heard Dean say ‘I’ve lost the rudder’.

â€œI was clipped into the boat and when I went to eject myself the clip didn’t come undone – which immediately pulled my hair up, so I went to get the knife. ‘is filled right away. It quickly passed from being OK for a high fever – from my point of view. Right away, I was underwater and stuck under the mainsail. My head was under the ‘water and I was stuck. Cooper grabbed his knife, cut the lifeline, and pulled me out.

â€œFrom there the four of us got out from under the mainsail. We did the count, everyone was safe. Very quickly it became very quickly went to a rescue of the boat.

“Back then, we felt like we had an air pocket in the boat, and that kept it afloat. We all thought the boat was going to sink.”

In the video, commentators and Luna Rossa’s crew provide their take on the incident.

American Magic’s second AC75 Patriot gave a glimpse of what was to come on her first sail, when she made a dramatic leap after some youthful issues and a sudden increase in wind speed.

His capsizing on day three of the Prada Cup was one of the unforgettable moments of the entire regatta. It certainly set a new readership record for a single story on Sail-World.

The stage was set earlier in the day when it was announced that the race would take place at the north end of Course A, off the bays of Auckland’s east coast and adjoining the course area of â€‹â€‹the ‘America’s Cup 2000 and 2003.

The forecast predicted an unstable weather situation, with thunderstorms and squalls of rain that should cross the race area by the end of the afternoon.

INEOS Team UK, the British Challenger had shaken the Prada Cup with four wins in three days of racing, and had dominated the Italian Challenger Luna Rossa in the first race of the day. This race was canceled after a gust of rain moved across the course, causing a significant change in the wind. The two AC75s remained with the mainsails hoisted and attached to their tenders as the 30 knot squall shifted. In the new sail, Luna Rossa was initially leading, but with her new found speed, INEOS Team UK was leading from the second lap, and continued to gain by 18 seconds – which at AC75 speeds in these conditions is a comfortable margin.

Patriot had scored a retirement the day before, finishing more than five minutes behind Luna Rossa, after both boats had enjoyed periods of displacement in the capricious breeze.

The pressure, therefore, was on the New York Yacht Club team to win the standings, mainly for reasons of team morale and bragging rights – as it looked like the Italian and American teams would compete in the half. -final with the INEOS UK team seeming a place for first place in the Challenger final.

The American team started well and held a good lead in the race, cruising in gloomy and gloomy conditions with the breeze blowing in their early teens. Approaching mark 5 in the photoboat, a victory seemed inevitable for Patriot and we headed towards the finish hoping to get there before Patriot – who would have sailed very fast in the last stage – who looked like a long edge with a short at the finish.

Another gust of rain came, when one of the photographers, Chris Cameron, following an agreed practice, shouted that there was action in the back. The wind had suddenly picked up and the dark gusts radiated over the flat water.

As I turned and reached for a camera, I had the unforgettable sight of an AC75 completely in the air and blowing sideways in the gust of rain, like a giant kite.

After what seemed like an eternity, Patriot landed, landing sideways, and it looked like she hadn’t passed the point of no return yet. But the fight was out of the AC75 and she turned and gave in to the breeze.

We had seen Emirates Team NZ participate in a practice race a few days before, and it took their support team a few minutes to straighten Te Rehutai.

But it was different – two minutes dragged in a lot more – it looked like 20. It sounded like a replay of the Emirates Team NZ dive in Bermuda – under similar conditions, when it took a long time for the team careful support to straighten the foiling catamaran which was tearing up pieces of sail and fairing like confetti.

Patriot was straightened up and pulled his head to win and it was immediately obvious that something was wrong, then the arc started to flow slowly but noticeably.

Then he went under the water, and it looked like a hatch must have jumped out and the water was coming down below.

As the team dinghies arrived with more pumps, the water level rose on the jib luff, stopping halfway up the stylized America’s Cup logo near the point of tack of the jib.

Many expected Patriot to sink, in a replay of One Australia’s spectacular plunge into the Pacific Ocean during the 1995 Louis Vuitton Cup. It was just a matter of how quickly the end was coming.

Disturbingly, an inflatable mark was hoisted to the top of the Patriot’s mast to keep the yacht upright, if it sank in relatively shallow water (about 40 feet deep).

With a multiplicity of inflatable marks attached to the bow, the sink rate decreased and stopped. The AC75’s hull had a residual buoyancy of about 1000 kg less than its total weight. It appeared that an air pocket stuck in the aft end of the hull was holding or leaking only slowly.

A small swell came in from the east, the direction in which the Patriot’s raised stern was pointing, causing the AC75 to roll slightly, submerging the starboard side deck underwater and ensuring that the sixteen deployed pumps would never have a chance to progress. .

In the end, this was a very basic seamanship piece, dating back several centuries to the time of Captain Cook or before, known as fothering, where a sail or crash blanket is rolled up. around the hull to prevent part of the entry of water.

With the Team New Zealand dinghy on the starboard side of the Patriot and the American Magic dinghy on the other, the crews worked hard to cushion the lazy roll of the AC75 in the swell, to prevent side decks. to be submerged – and at least slow down the water inlet to the point where the sixteen pumps could make an impression by draining the water from the flooded hull.

Gradually, the hull freed itself from the water and began a very slow four hour journey to the American Magic base.